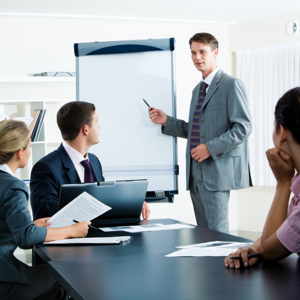 At crucial moments, well-timed executive decisions to steer projects and programmes are often in short supply. Subsequently, issues are left unresolved, key milestones are missed and the overall project delivery is delayed. Whilst it may appear that executive indecision is the main culprit behind the delay, it's not the primary cause.

The root cause lies in how executive leadership is exercised in project steering committees. Normally, such committees are organised to encourage executives to provide guidance to project teams and participate in the resolution of issues amongst other responsibilities. However, this is usually done in a pluralistic manner as leadership is collectively shared amongst the executives. Figure 1 below shows a typical project hierarchy that consists of a project steering committee that has four C level executives.

In practice, this works fine for issues that are clear-cut to solve, as executive consensus is normally reached. But for more complex issues, executive agreement is at best painstakingly slow and more often than not, issues are deferred for the CEOs input. The input can be either in the form of guidance consisting of principles, or a definitive decision thereby putting to rest any executive misgivings about solving the issue. Usually to obtain the CEOs input requires the PMO together with the Project Sponsor to compete with other departments for a time slot with the CEO (predictably this can be an arduous wait, as CEOs are extremely busy people). The ensuing delay can very quickly bring the organisation's flagship project/programme to a complete halt, escalate costs and squander opportunities to address competitors.

Another drawback of pluralistic leadership is that most solutions negotiated are often diluted to appease other executives. In the end, a compromise solution is reached, which neither addresses the problem, nor helps the project move forward. Its only achievement is that all the executives concur, not whether the solution is right, or wrong. Such resolutions render projects steering committees ineffective, deter Project Managers and Sponsors from escalating issues, and promotes a culture of indifference.

In the launch phase of the company, the CEO is the person entrusted with executing the role of the Project President. But soon after launch, the CEO usually hands over this responsibility to the CxOs collectively, without nominating a successor with all the powers of the CEO. Invariably, this pluralistic leadership exercised by the executives leads to the all too familiar problems mentioned earlier.

In practice, the best candidates amongst the CxO to perform the role of the Project President are the Chief Commercial Officer (CCO), Chief Operations Officer (COO) and the Chief Project Officer (CPO). However, the COO and CCO can become too pre-occupied with their day to day duties, and may not have enough time to execute the duties of the Project President. Therefore, the CPO is the natural candidate for this role, but in many organisations the CPO lacks the mandate and the support of fellow executives.

If companies really want to improve their performance in the execution of initiatives and reduce time to market then they should take a serious look at restructuring project steering committees. By appointing the right person to play the role of the Project President, delivery of projects and programmes can be vastly improved.

Abid Mustafa is a seasoned professional with 18 years' experience in the IT and Telecommunications industry, specialising in enhancing corporate performance through the establishment and operation of executive PMOs and delivering tangible benefits through the management of complex transformation programmes and projects. Currently, he is working as a director of corporate programmes for a leading telecoms operator in the MENA region.