Strategy vs. Luck: Managing Projects in the Face of Uncertainty 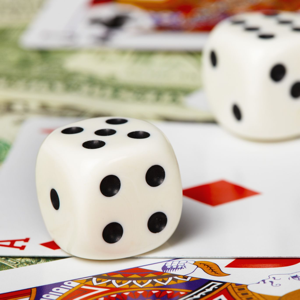 Managing projects is all about strategy. You have to decide in advance how you're going to plan out tasks, mitigate risks, staff the project team and so on. All of these decisions and plans form the project strategy. As the project moves from planning to execution to monitoring and then to closing, the strategy is documented, refined, and implemented.

Hopefully, everyone understands the management of the project strategy and what the project team and stakeholders are doing in order to be successful. While it might seem that all the planning and processes involved don't leave much room for luck, luck is as much a part of life and projects as strategy is.

A game of chess involves no luck at all. All of the pieces can be seen by both players. Every piece can only make certain moves. You may not know exactly what your opponents will do on their turns-but you do know all of their options. If you can strategize better than your opponent, then you will win the game.

However, very few games are like that. Most games involve luck or chance. The chance element might be rolling dice. It might be the shuffling of cards. It could be something else, too. The main thing is that luck and chance are inherent. There's an element of the game that the player is not aware of.

Projects also have the element of chance. Project managers know a lot of information, but certainly not everything there is to know. For example, a stakeholder might leave the company, or the project team may not fully understand the scope-whatever it is, the element of luck or chance will play a role. The project manager, then, needs to be prepared to deal with it.

When you play a game with dice, you never know what the dice will show (unless they're loaded, that is!)-but you can strategize. The dice will always show a range of numbers, after all. For example, you may not know how many spaces you can move in a board game, but if the die is six-sided, then you do know that you'll move between one and six spaces. Knowing the range of possibilities helps you plan out the strategy you can use to win, even though your numbers may or may not come up.

In project management, you can use similar variables even though the outcome is unknown. For example, if you include a budget for risks in the project, then you know how much risk you can absorb without impacting the planned cost or the planned schedule. You may or may not end up with more risk than you wanted. You will, however, know if you have more risk than your budget can afford.

Shuffling and Stacking the Deck

In games where the shuffling of cards leads to random drawing, there's much less strategy involved. Sometimes, players just have to go with the cards they're dealt. However, in some games, you can stack the deck (legally, that is) to try and give yourself a favourable hand to play. For example, in Poker, you can keep some cards in your hand and draw other cards. In deck-building games, you can create the deck you think will win the game. Yes, you still have to deal with the randomness of shuffling cards, but you do what you can to help build the best hand possible.

Whether you're playing a game involving luck or you're managing a project with unknown variables, look ahead and plan for random elements. You're working on the current tasks or making the current move, but you should also be thinking about what will happen in the next move, in the next phase, or in the next month.

The end of the project is a goal. Your objective is to win the game by succeeding in the project. Thus, you must always be thinking ahead to the next thing. Don't get caught in a trap where you win the hand but lose the game.

How do you plan for the next move?