Managing the "Meeting from Hell!" 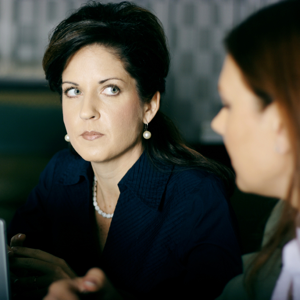 Project Manager Sherry Martin couldn't stop thinking about her last team meeting as she walked down the hall towards her office. Slamming her office door behind her, she let out an exasperated scream and looked for something to punch! Her team was driving her absolutely crazy and she channelled Scarlett O'Hara as she proclaimed, I will never run a meeting like that again! Her problem in a nutshell boiled down to three really difficult personalities that continually recurred on her team. These personalities were indeed a cancer not just infecting the team and its results but also spreading throughout the group and impacting the other team members as well.

Here's a little help for Sherry, and for you! Let's explore these common dysfunctional personalities and how to effectively manage them.

We've all experienced "the dominator" in one-way or another. Some people tend to dominate discussion simply because they're excited and overzealous. These can actually be assets to the team if we can find appropriate approaches to harness and manage all that positive energy. Unfortunately, most of us are more familiar with the other type of dominator - the overly aggressive, bullying personality that tramples on others' comments and may attempt to hijack the meeting completely! Sometimes, these dominators are overly negative "That will never work here!"), and other times they just won't let anyone else get a word in edgewise. In either case, dominators can certainly sour not just the effectiveness of the meeting, but also the morale of the team.

Techniques for effectively managing the dominator…

Increasingly, we're seeing more and more multitaskers in our meetings. Aptly named, they're the ones whose attention constantly darts between the meeting leader and any number of other tantalising distractions (for example PDA, laptop, reading material, etc.). Indeed, the multitasker is physically present but mentally elsewhere.

Techniques for effectively managing the MultiTasker…

The rambler can seriously derail a meeting with their circuitous, protracted, rambling commentary. Oftentimes, the rambling strays into areas bearing little resemblance to the topic at hand. The rambler cannot only significantly extend the length of a meeting, but also completely alter the meeting content - thereby minimising the team's efficiency and effectiveness.

Techniques for effectively managing the Rambler…

Clearly, Sherry is dealing with some personalities that are difficult to contend with, but the biggest mistake she could make as a project manager is to ignore them. Too often project managers simply ignore their "problem children" and instead stick their head in the sand hoping the behaviour will improve on its own. It won't!

As project managers, we're constantly balancing our focus between task and relationship. Indeed, it is because of our need to maintain positive team member relationships, that we often avoid dealing with problem behaviours. We must realise that when we fail to promptly address counter-productive behaviour in our team meetings, we not only allow the project to suffer, but also we allow our image and credibility to be eroded somewhat. Indeed, if we are frustrated by dominators, multitaskers, and ramblers in our team meeting, others are as well. When we don't address the behaviour, we're simply sending a message to the rest of the team that we condone the behaviour or we're not strong enough to address it. Neither is a healthy message to send.

The good news is that there are a variety of facilitation techniques at your disposal, and the techniques enable us to be assertive while preserving those critical relationships. Remember these key points when using the techniques: