Your Project Does Have A Goal 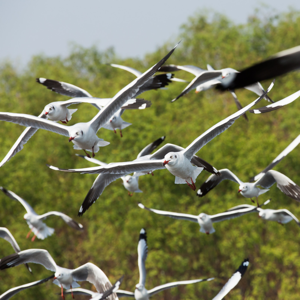 Jurgen Appelo wrote a post, Your Software Project Has No Goal. His argument was summed up in the first sentence:

Human beings, organisations and software projects share one important thing: they have no intrinsic goals.

Um…no. That's wrong. And the reason why it's wrong is in the very next sentence:

The goal of something that emerges from interacting parts is not determined by the goals of those parts.

So, for example, in flocking a bird may only be obeying three simple rules, keep in touch with the flock, travel in the same average direction, but don't get too close to any individuals. From these three simple rules, we start to get the typical complex flocking behaviour we all recognise, despite none of the individuals trying to behave in that manner.

In other words, the flock doesn't have an intrinsic goal, it only happens because of interactions between participants having an emergent effect, not because they decide to form and behave as a flock.

Perhaps the strangest example of an emergent phenomenon is intelligence. Billions of neurons are connecting to each other, each individual cell following simple chemical prompts. But out of all of this, we get thought, memory, consciousness.

But the important thing to remember about all of these phenomena is that they emerged not because they were what the individual participants were aiming for, but as an unexpected outcome of it. You can readily see, however, where this breaks down for organisations and for projects.

You see, organisations, at least business organisations, don't typically start because there happened to be a few people hanging around. They don't emerge because separate individuals are trying to have a job.

But because the organisation is a conscious creation, the creators of it harness these interactions, or stop them. For a business as a form of organisation, the simplest generalisation of a goal is to make money for the creators, or the owners. So those efforts of the individuals that help this goal are rewarded, by decree of those on high. Those efforts which damage this goal are punished, by decree of those on high.

And this goal, to make money, is an intrinsic one, it is the very reason the business exists. The reason an organisation can have this intrinsic goal is because it is created, it is not the product of interacting elements.

The same argument follows for projects. Projects don't (or at the very least, really shouldn't) start because there are some developers sitting around twiddling their thumbs, time on their hands, nothing to do. No, a project starts because some conscious agency, a creator, decrees that there is a problem to be solved, an aim to be met, a goal to be achieved.

That act of creation means the project starts with an intrinsic goal, again, because a project does not emerge out of the interactions of those within it. It is created, and then people are brought into it.

Trevor Roberts is a project manager who runs his own project management consultancy, working with business and government to help deliver successful projects. He is passionate about project management and its importance in helping organisations achieve success. He is continually learning more, and passing on what he has already learned to others through his blog Project Management Guide. You can follow Trevor on Twitter at @trev_roberts